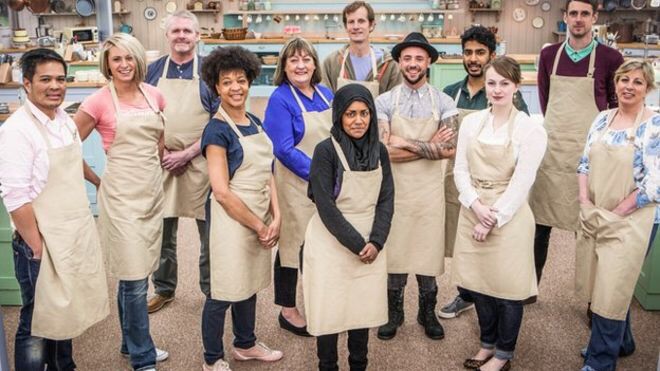 The Great British Bake Off is a big deal in our abode. For me it’s actually one of the few ‘reality’ competition shows where I don’t want them to all lose.

And this year it seemed like the whole nation was gripped with Bake Off fever. Sitting rooms across the land were full of soggy bottoms and feverish muttering of “I can, I will, I must!”. 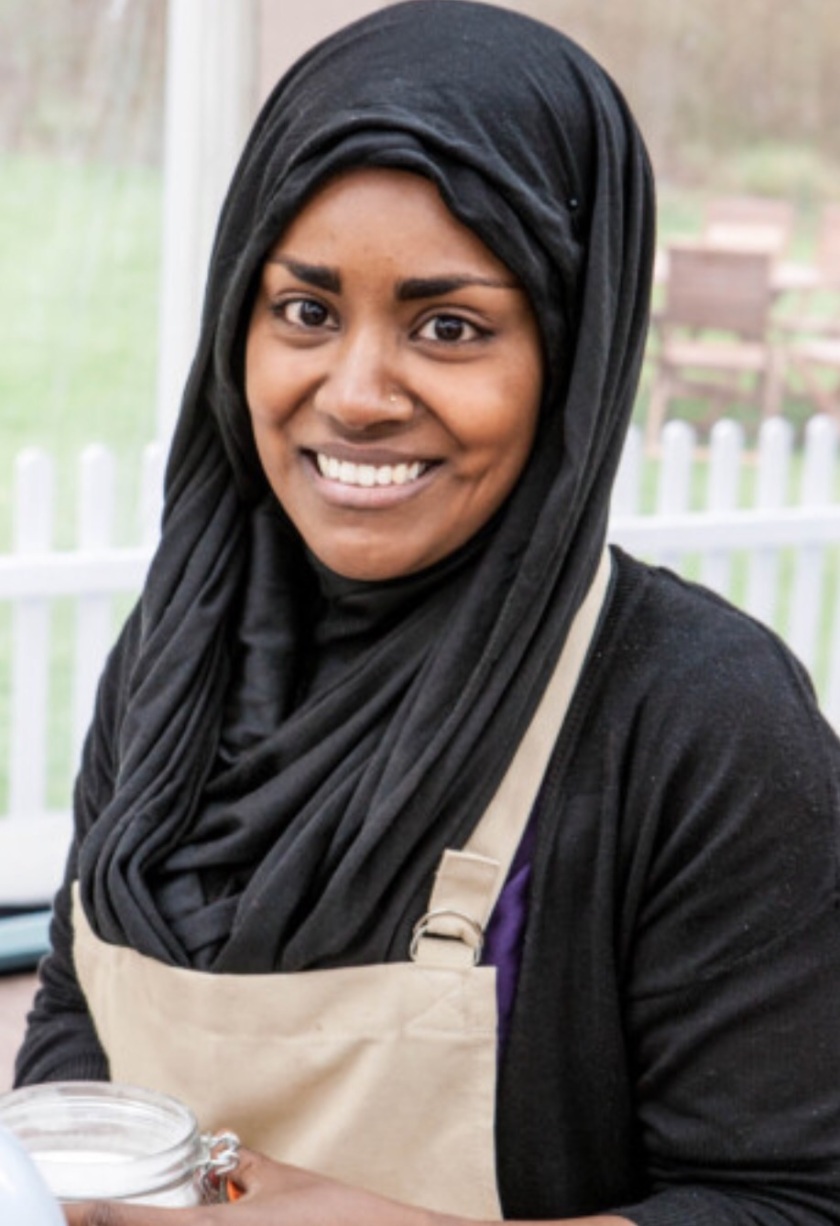 Maybe that’s how me and the OH ended up having our own mini bake off throw down on a sunny Sunday afternoon in Brixton last weekend. 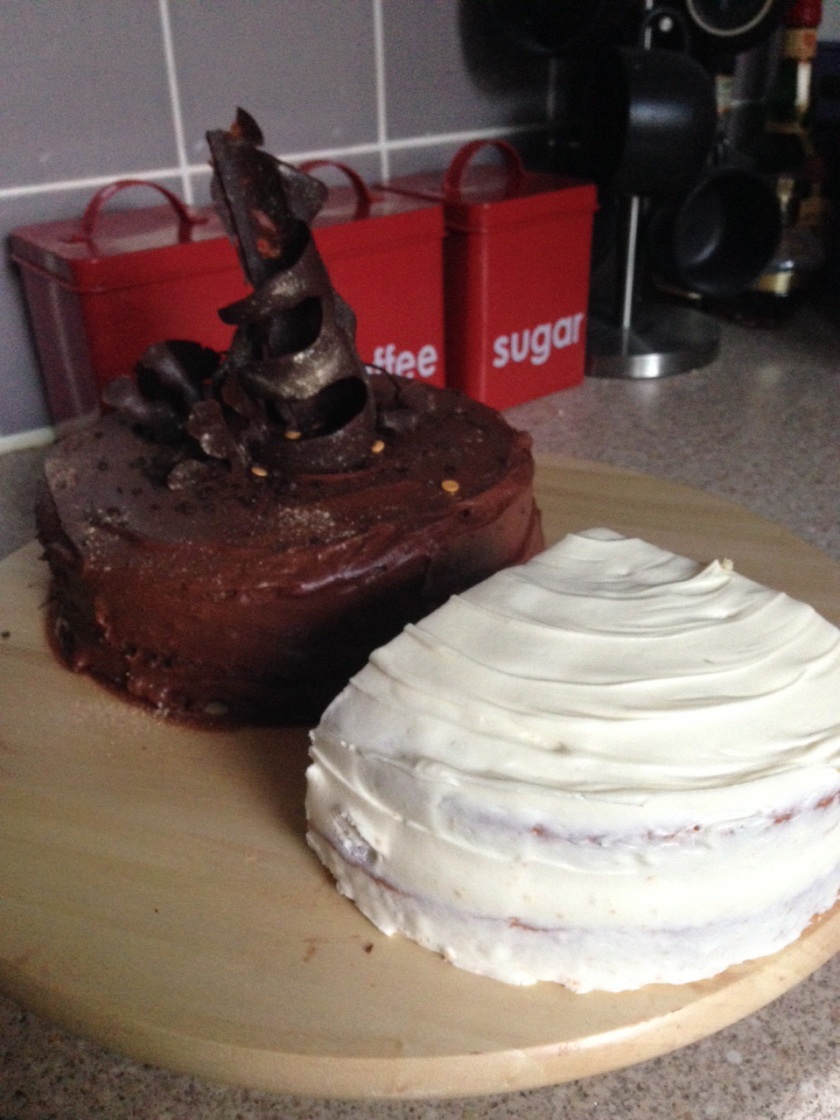 Mr Vs Mrs… Who will be crowned winner?

So here is the recipe for the winning* cake.  I should probably say my mother was the (female) judge, so she may have been slightly biased in her decision.

Feel free to try the recipe and let me know what you think or share you favourite cake recipes.

Start by putting your butter to one side to warm to room temperature and preheating your oven to 170 degrees (gas mark 3).

Mix the butter and sugar together until light and fluffy.  Once blended add one egg at a time. 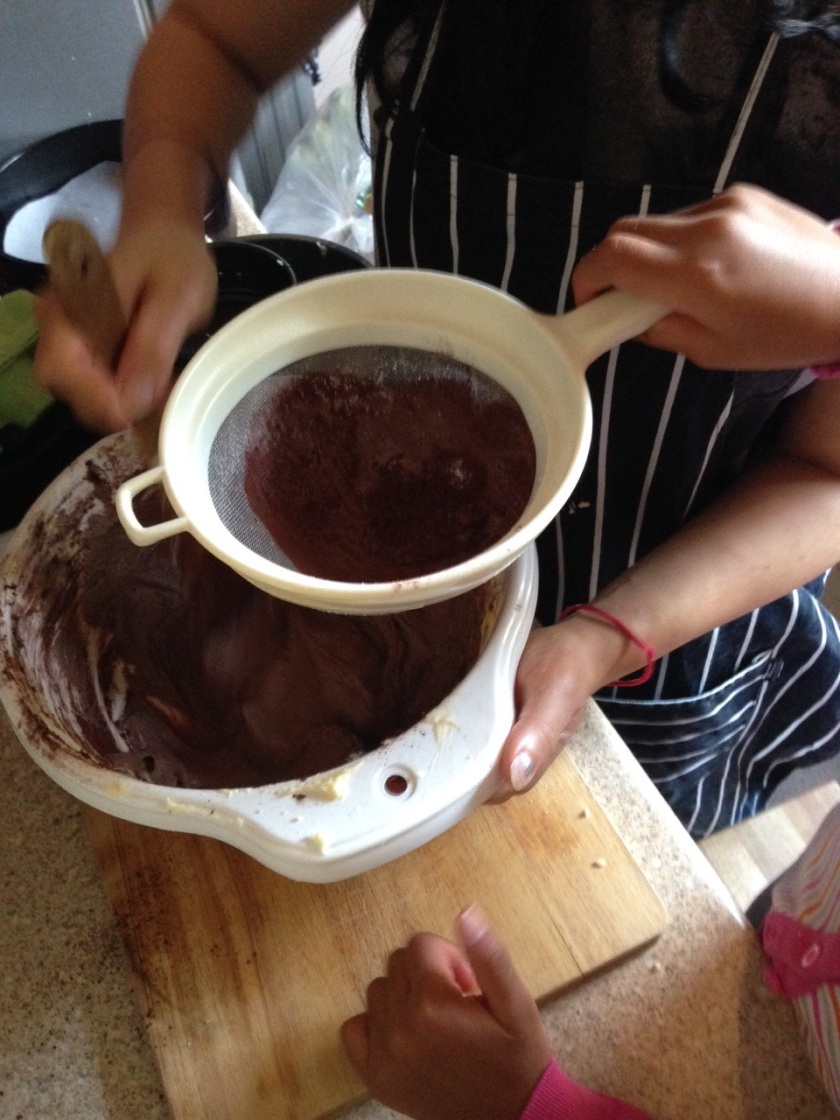 Is it cheating if you have your little niece helping you?

Slowly beat in the cocoa, baking power and bicarbonate soda.

Next add the plain flour and the milk.  Once mixed add the coconut flour until the mixture in completely combined then add the rum.

Fill two cake tins with the mixture and place in the oven for approximately 45mins.

Once the cakes are in the oven start to make your custard.  Mix the custard powder, sugar and cocoa powder together in a saucepan.  Next, stir in the rum until you get a smooth paste.  Then add the milk a tablespoon at a time.  The challenge is to add all of the milk without making any lumps.  Place on a medium heat to allow to thicken.  Remove from heat and place custard into a shallow cake tin lined with cling film and place in fridge to chill for one hour.

Melt 50g of chocolate and drizzle over a rolling pin which has been covered with baking parchment and place in the fridge to cool.

Remove the cakes from the oven and leave to cool and begin to mix your icing.  Beat the icing sugar, butter and cocoa powder together.  Once combined add the milk to the butter mixture a couple of tablespoons at a time.  Finally add the rum and continue to mix for five minutes.

Remove tthe custard from fridge and layer onto the bottom half of your cake then top with the remaining cake.  Ice the cake with your chocolate icing and decoration.

As I open a bag of treats that my mother has brought over, I can’t help but smile… Amongst gardening books and baby grows, a goddess gazes up at me.

Has the sun set on the domestic goddess?

The Original Housewife…  Recent problems aside, this women has shaped how many British women view their role in society….

A woman with exceptional domestic skills, especially one who excels at cookery and preparing meals.

…I am not one of them, yet I admire any person who is highly skilled, motivated and passionate about what they do.

And the self titled Domestic Goddess, Nigella, is not alone in her passion for domestic supremacy.  We are in a time when classic DG skills like baking, knitting, gardening, sewing, and cooking are all making a revival – Dare I say it they are “#trendy”. Just look at BBC programming for examples.

It seems that everybody wants a slice (or at least an amuse bouche) of that old Domestic Goddess life.

Pushing nostalgia and 1950s fashion lusts aside, that life was due to necessity and not as glamorous as many companies, the BBC or Mad Men would have us believe.  Fortunately, as society changed, gender roles became more undefined and technology adapted to suit, freeing DGs to step through the Stepford gates onto the world stage.  As society and technology progressed so did the Domestic Goddess.  Her skill set diversified; baking alongside banking, motherhood alongside management, all to achieve the relentless goal of finding a balance between her responsibilities, aspirations, commitments and dreams.

In this blog I salute  a couple of the  Goddesses that have inspired me.

1) My Mother  This I’m sure is no surprise.  Studies show that it is the mothers achievements that play the most significant role in determining the aspirations of offspring.  From as early as I can remember my mother has worked, and I mean worked hard, yet still found time and energy to be spontaneous and caring.  She has shown me how to be determined and focused yet still find the work/life balance.

2) Boudicca Boudicca was queen of the Iceni people of Eastern England and led a major uprising against occupying Roman forces, and I had an absolute fixation with her when I was 6.  I think she was officially my first girl crush.  Obsessed, I pleaded with my mum to call me Boadicea, slightly different from the name change requests I receive from my students now… Although before I get all “the youth of today” my love of Boudicca originally spawned from a children’s television programme called Bill the Minder, in which the main character’s little sister was called Boadicea.

3) Josephine Baker To a fifteen year old girl, the autobiography of Josephine Baker read like a film script; a poor girl finds fame and becomes America’s first African American millionaire, moves to France, joins the resistance, becomes a spy, then in later life aims to overcome racism by becoming mother to her Rainbow Tribe of adopted children from around the world… Maybe Ms Jolie is also a fan.

4) Minna Salami In a small, sweaty dance studio in 2008, I met Minna shaking her thang to the Brazilian beat.  I couldn’t believe this beautiful, intelligent women was so humble… And brave.. Quitting her successful profession as a graphic designer, she declared her passion to become a writer and within a year Ms Afropolitan was born.

5) Benazir Bhutto Hearing my mothers childhood reminisces of how it was normal for her mother to pace “respectfully” behind her Pakistani husband along the cold East London streets, I knew that a women becoming the prime minister of Pakistani was an incredible feat.

6) Margaret Thatcher (Ok so I would not call her a goddess but…) A while ago I was asked whether I thought Barack Obama would really make a difference to the lives of young black boys, which lead me to the rather uncomfortable conclusion that the milk snatcher had inadvertently empowered and inspired a young mixed race girl from Peckham. Now I’m sure this was never her aim.  But she knocked down barriers for me that I never even knew existed. Growing up I never thought it was particularly impressive to have a lady as prime minister, in fact it was my norm.  If I wanted to become prime minister when I grew up, no big deal.  What I have learnt from this is that you never know who you inspire just by doing your job, also never assume that you have nothing to gain from somebody you despise.

With a couple more to add, the question I pose to you is..

Who has inspired you?