Was there ever a time before Scapegoat Britain? Part 1

At first it seemed ridiculous to believe that people would believe that all of England’s problems were the result of the EU and of course those “terrible immigrants”.

We laughed about it in the staff room.  The same staff room where for the past year, disgruntled colleagues have  viciously blamed and attacked the Head Teacher for staff cuts that are solely the result of Government cuts to education.

I remember a boy at our school who was an amazing football player.  Even at the tender age of five he had incredible ball control.
The problem was he was arrogant, rude and violent to children and adults alike.  But when reprimanded for his actions, it was never his fault.  Spurred on (particularly) by his mother, it was always another child’s fault or the teacher had a personal vendetta towards him. Rather than changing his behaviour, he changed schools.

Unsurprisingly his misbehaviour continued.. So he moved back to our school, blaming the teachers and children at the previous school for the move back.  Of course, as soon as he got into trouble again he resumed into his usual routine of pin the blame.

And that’s how it continued.

One day he was scouted by one of the big UK premier league teams.  Such a life changing opportunity.

But he was dropped.

He wasn’t a team player, couldn’t handle feedback and didn’t respect authority or his team mates.   But, of course, it was the coaches/team mates fault, “they didn’t respect him” enough.

Such a huge opportunity lost because he had failed to take responsibility or learn from his mistakes. 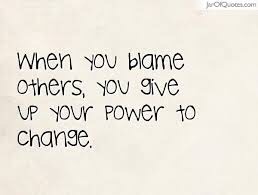 I saw him the other day working in a local shop.

Just imagine what could have been.

16 responses to “Was there ever a time before Scapegoat Britain? Part 1”